Vespa, Piaggio and all associated logos are trademarks of PIAGGIO & C. S.p.A.

Innocenti and all associated logos are trademarks of Fiat S.p.A.

Lambretta and all associated logos are trademarks of SIL Ltd.

Bar Italia Classics claims no connection to the above trademarks.

Misuse of the fuel valve control is probably the most frequent cause of "problems" we hear about when a new rider picks up their scooter and calls back after a day or two.

Most vintage scooters have a fuel valve with three positions; OFF, ON, and RESERVE. The lever MUST ALWAYS be moved to the OFF position when the engine is not running. Before you call and tell us that there's a huge leak dripping from your exhaust, that the bike is hard to start and when it does start, huge amounts of fuel/oil shoot all over your garage, please make sure that you didn't leave the gas in the ON position after you last rode the scooter a week ago. The gravity-feed nature of fuel delivery means that when the valve is left on it will continue to fill the carburetor float bowl, trickle through the jets, and flood into the motor. A motor full of fuel will not start. It is a myth that a good float-needle control-valve will stop all flooding. While the float needle blocks off flow to the carb when the float bowl is full, it does not stop the fuel from flowing from the bowl through the jets and into the veturi and once this happens, the float-valve lowers, opens again and starts the cycle over again. A bad needle-valve will cause an engine to flood more quickly, but even a properly-working needle valve will always eventually flood through if the tap is left ON.

Another call we often get is when a customer runs out of fuel while in the ON position and thinks that there is something wrong with their machine. They see fuel in the tank and assume that they are not out of fuel, not realizing that the RESERVE position is not a separate tank, but simply a separate, lower straw on the fuel valve in the same tank. Anytime you are troubleshooting or you suspect a problem, it is a good idea to try both fuel positions. We had a customer push their bike six miles in 100 degree F heat one time thinking they were "broken down," only to have us turn the fuel lever to RESERVE and start the machine on the first kick.

In the USA, in 1975, the DOT set out to standardize all motorcycle fuel-valve positions, requiring fuel positions to be clearly labeled with the OFF position always in the middle. This lead Piaggio to implement a rather awkward design employing a large plastic lever assembly that would, by use of a plastic bevel-gear, swing UP, FORWARD, and DOWN. Needles to say, these bevel-gear levers have not stood the test of time very well and are often converted to the paddle-type lever once the bevel-lever has broken. This of course presents a problem in that if the paddle lever conversion is done while retaining the original '75-on USA petcock, the lever positions will not be intuitive for those used to the older style or European style paddle positions; i.e. the left-pointing position will now be RESERVE, the right-pointing position will now be ON, and the position in the middle will now be OFF.  On the other hand, another annoying inconsistency arises when the '75-on USA plastic bevel-lever is retained but the petcock itself is replaced with the standard type. In this instance, the "clearly labeled" positions become completely wrong: the "OFF"-labeled position will function as ON, "ON" will function as RESERVE and "RESERVE" will function as OFF. So much for simplicity and clarity. Obviously, when a machine arrives in our shop with any of these mis-matched inconsistencies, we will always encourage the customer to allow us to remedy the problem. And we are unique in the industry in that we have the hard-to-find parts in stock to fix these issues.

One other variation to note is that some very late P-Series Vespas which feature a fuel gauge will have only OFF and ON positions. The ON position on these models is generally where you would expect to find the RESERVE position on a standard, earlier machine.

So-called "Choke" devices actually come in two primary types. The purpose of both of these are essentially the same although the methods to achieve their goals are different. The goal is to create a condition where the engine will receive a "richer" fuel/air mixture to enable easier "Cold Starts." To be extra clear, a "richer" mixture means more fuel/less air than is generally ideal for normal operating temperatures. The first type is an actual true "choke" system which generally uses some sort of mechanical flap or slide to physically block air from reaching the inlet of the  carburetor. The second and more common type of "choke" is actually an enriching valve in the carburetor that, when activated, dumps an excess amount of fuel into the inlet. Actual, air-restricting choke devices were common on many early machines of the '40s-'50s, but began to be phased out for the enriching-valve-type systems in the early '60s. Nevertheless, the term "Choke" has stuck and is used almost exclusively to refer to either system.

Another related topic that deserves mention is the carburetor "Tickler" device. These are found on many very early carburetors as well and are essentially another way of achieving the same "richer" mixture state. These devices simply push down on the carburetor float device and can be gently pumped or "tickled" to prime and get the fuel flowing from the tap and to over-richen the mixture for the same cold-start purposes as the above-described "choke" systems.

So that takes care of the "hows," so lets continue with the "whens" and the "how-tos."

First off, a "cold start" doesn't just mean when the weather is chilly. A cold start is generally the first start of the day regardless of ambiant temperature, and also any subsequent starts after the machine has been off for an hour or more. Weather does come into play at this point though, as if its 100 degrees outside, you may not need to use the "cold-start" procedure for three or more hours of being parked.

The procedure is fairly simple. For a "cold start," first turn on the fuel valve, activate the "choke" pull or lever, and (with the machine on its centerstand) give it a good solid kick through with the kickstart lever all the way to the ground. Do not twist the throttle at this point; opening the throttle will actually introduce more air and defeats the purpose of using the choke. Only once the engine has started should you give it any throttle. As soon as the machine is running, the "choke" activation should be turned off. Some machines will need the choke a little longer than others, but as soon as the engine will stay running without the choke, that's when it should be shut off.

As mentioned above, warm-starts should not involve the choke, and will often benefit from some amount of throttle opening while kicking the motor through.

All of that said, every engine is unique and once you are "in-tune" with your engine, you will have an understanding of when and how to balance the variables of the starting procedure. However, if your scooter varies drastically from these guidlines, it could be indicative of a problem with the carburation/fuel setup, ignition timing or deeper issues, and we would recommend that you schedule a service with us to get everything back to normal.

Unlike modern vehicles, vintage scooters require slightly more effort and input from the user. These vehicles are relatively "low-tech" and require the operator to be a little more "in-tune" with the machine. Modern cars and motorcycles have a myriad of sensors and computers constantly gathering information about ambiant temperature, combustion characteristics and all sorts of other variables and making constant adjustments to air-fuel mixture, idle speed, ignition timing and other aspects hundreds of times per second. Classic scooters have no such systems in place, and requiere instead that the operator be open to feedback from the engine primarily by means of sound and feel. 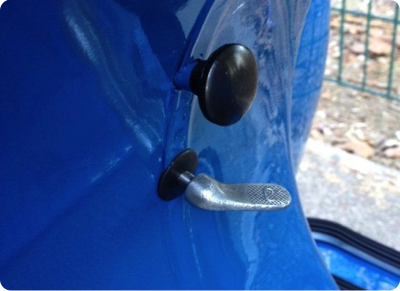