Vespa, Piaggio and all associated logos are trademarks of PIAGGIO & C. S.p.A.

Innocenti and all associated logos are trademarks of Fiat S.p.A.

Lambretta and all associated logos are trademarks of SIL Ltd.

Bar Italia Classics claims no connection to the above trademarks.

So, without further ado...

The issues listed below were uncovered during a minor surface-level evaluation of the scooter.  The first list is obviously the primary concern, however the second list should not be overlooked, as it illustrates the many reasons why this scooter should not have been advertised as a "restored" or "showroom condition" vehicle.  It is our educated guess, based on what we have seen so far in this evaluation, as well as previous experience with bikes of similar origin, that further disassembly and inspection would most likely, if not definitely, reveal further similar and possibly worse issues underneath.  While we have made an attempt to remedy some of the major issues listed below (i.e. cotter pins), it is our opinion that this vehicle remains UNSAFE and UNFIT FOR ROAD USE!!!

- Major structural and aesthetic parts of the scooter's chassis/frame appear to be fabricated out of poor quality sheet metal, and welded in, producing a poor patchwork rendition of the original frame.  This is particularly concerning because a Vespa's structural strength is based on the monocoque principal of it's original stressed-steel unibody construction. -- This structurally unsafe, quilt-like patchwork of a body-chassis unit is typical of EVERY Vietnam restoration that we have inspected. This lends credence to rumors that many of these "frames" were actually cut up by the Vietnamese Ministry on Transportation as part of a clean-air voucher program where citizens would turn in their old, two-stroke scooters in exchange for voucher discounts on modern, cleaner-burning motorcycles and scooters. Following that, the bodge-peddling entrepreneurs, mostly shady British and American ex-Pats, pay people pennies an hour to pull these chassis scraps out of dumpsters, weld (or brass-braise) them back together in sweat shops, slather them in Bondo, shinny paint and gaudy, cheap accessories in order to sell to unsuspecting Westerners, unwilling to do their pre-purchase homework.

- The scooter was sold with no cotter pins on the front or back wheel.  Without these very simple and inexpensive parts, there is nothing to stop the main center wheel nuts from vibrating loose and the wheels from falling off.  This is obviously a MAJOR concern. -- This omission is also very typical of the majority of Vietnam “restorations.”

- The scooter's front break lever was made out of very poorly cast metal and was installed with an incorrect mounting screw.  This caused the lever to actually brake off in the new owners hand while she was loading it onto her trailer.

- The wires feeding the external high tension ignition coil were twisted together (not crimped or soldered).  This can cause not only poor and intermittent running conditions, but also harmful and even fatal electric shock.

- A front fork from a completely different Vespa model was installed on this scooter to facilitate the conversion to the (also incorrect) 10" wheels.  This "upgrade" fork is too long for the type of chassis it has been installed in, causing the steering bearings to be dangerously loose.  This will cause unsafe handling and excessive vibration at all moderate to high speeds. -- 10” wheel and fork “upgrades” to natively 8” models are very common on Vietnam “restorations.” It has to be said that there is almost never a real reason to do a 10” conversion; 8” machines are wonderful bikes to ride. There are, however, ways to do a conversion safely, but it should be really be reserved for highly-custom machines and we would never consider this on anything that we would call a true restoration. It should also be noted that when done incorrectly, as it is on most Vietnam “restorations,” any negligible “improvement” in handling between 8” and 10” setups is massively negated by the compromised geometry and aforementioned bearing issues, etc.

- The gear-selector box and shifting control cables were incorrectly installed, causing the scooter to randomly pop itself into gear from neutral, usually upon startup.  This also caused there to be absolutely no correlation between the gear shift indicator numbers and the gear you are actually in.  This can be very discouraging and UNSAFE, particularly for novice riders.

- Many fasteners throughout the engine and frame which require lock washers had none.  This makes them considerably susceptible to vibration and they will eventually come lose and fall off. -- Again, a very dangerous and very typical feature of these “restorations.”

- One of the five studs that hold the rear wheel rim to the rear hub was completely missing and replaced with a standard nut and bolt (incidentally of the incorrect size).  This bolt was also only finger tight.

- Front break actuator arm is attached at the hub with a flimsy screw rather than a pressed in pivot.

- Fuel tank is full of rust and sediment which has also found it's way into the fuel tap, fuel line, and carburetor, requiring these items to be rebuilt or replaced for the machine to run correctly and not cause further problems.

- Air filter has a home-made screen causing incorrect air fuel mixture.  This part was also held in place with one incorrect screw and one screw was completely missing.

- Nearly every hardware fastener on the entire bike is the incorrect size and type.

- Incorrect wheel size, VBBs are supposed to have 8" not 10" wheels.  Because of the frame geometry of the VBB, this causes it to sit much higher than even natively 10" wheel Vespas.

- Engine swing-arm bolt is installed backwards and is held in place by a grossly incorrect nut.

- Center stand boots are on backwards causing it to be very difficult to catch the stand with your foot and park the bike.  Could also cause damage to the frame, but luckily (???) the center stand brackets and/or spring are also incorrect so this isn't currently a danger.

- Outer floor rails are missing.  Instead the bike has incorrect and poorly installed tubular steel trim.  This is a very common site on Indonesian and Vietnamese "restorations", as this trim covers up the floorboard edges which can be very difficult to perform successful bodywork on.

- Speedometer is a particularly bad reproduction of a speedometer from a completely different year and model of scooter, and in addition to looking highly out of place to the trained eye, it also doesn't fit properly into the headset. --  The funniest thing we encounter sometimes is when someone shows us one of these highly-incorrect-looking bikes and points to the low-mileage on the brand new $5 junk-speedometer and believes the machine to be some sort of rare-preserved original time-capsule. Actually, it really isn’t that funny when someone is duped into parting with thousands and thousands of dollars because the unscrupulous seller lead them to believe in that particular fairy-tale.

- Poorly cast accessories scattered throughout the bike.  While the tastelessness of these items may be a matter of opinion, I must argue that since none of these things actually come at all close to resembling factory equipment or even period accessories, then I believe it stands to reason that this scooter should once again NOT be billed as "fully restored" or "showroom condition".  This logic can also be applied to the metallic two-tone paint, the black rather than gray grips and cowl trim, the glovebox installed behind the legshield (incorrect for a VBB and used to impersonate more rare models), carb box rubber used to line the gas tank, glove box doors, and tail light (no carb box rubber on the carb box itself of course), very poor quality homemade spare tire mount, etc.

-Paint and even chrome plating has been applied directly over rusted parts.  Rust is seeping through the seems on the floorboards, and several other spots on the body show cracking paint and other signs of premature deterioration due to inadequate or omitted rust removal and improper prep and bodywork.

* sadly, the woman did not get her money back from the unscrupulous importer, and instead, we found out later, began trying to sell the bike to someone else, claiming that it was 100% legitimate and NOT from Vietnam and that we at Bar Italia told her so.  I can not even begin to describe how angry that made me.  This just goes to show you that some people have no problem turning right around and screwing someone else over and lying through their teeth in order to pass on their hot potato.

Starting at least as far back as the early 2000s, the vintage scooter community has been plagued by an onslaught of, excessively unsafe, unreliable and highly-incorrect Vespa and Lambretta "restorations" exported from countries in South-East Asia, particularly from Vietnam but also sometimes from Indonesia, Thailand and others. Please understand first off, that our indictments of these machines apply primarily to the unprincipled and deceptive scooter export-industry builders, and not to the many true enthusiasts of these countries.

In short: Do not ever buy a "restored" scooter from Vietnam.

We repeat: DO NOT EVER BUY A "RESTORED" SCOOTER FROM VIETNAM!!!

But please don't just take our word for it, of course. Google the term "Viet-Bodge" to see various accounts of these terrifyingly bad "restorations." Also note that we have actually been given the “opportunity” to purchase these "restored" builds, several times from several different exporter/builders, at wholesale prices that are far less than we generally pay for a proper, solid project-bike that still needs a full restoration. So logic would dictate that if these "restorations" were any good at all, we would have a showroom full of them and we'd be selling them for a pretty profit. But as it stands, we want absolutely nothing to do with these bikes, primarily for liability reasons. We do not service them, because they truly can never be made right for ANY amount of money. Sure, we could replace the engine, fork, headset and frame, and then you would only be left with a bunch of incorrect trim and badges. That last statement, of course, is basically a joke, because the reality is that "fixing" a Vietnam "restoration" correctly and safely basically just means to build a completely different bike. Another illustration of how bad the bikes are that are readily available in Vietnam, is the fact that the aforementioned true enthusiasts there are actually willing and offer to buy used bare-frames from our inventory in California for more money than complete “restored” Vespas sell for from over there. That alone should be the biggest indicator that the Vietnamese “restoration” industry is really working with serious junk as far as frame-cores go, if they are selling complete bikes for less than local enthusiasts are willing to pay for solid bare frames.

For now, let us just start by saying that all of the horror stories and warnings that you may have come across either verbally or on various internet sites and forums are true.  As with anything, there may be exceptions to the general rules, but we have yet to come across these exceptions.  We have had the displeasure of seeing first-hand several dozens of these “restorations” from multiple “shops” and importers and can say with absolute certainty that they are as bad, and in most cases far worse than the reputations that they have acquired.

Below is a good illustration of the very typical problems that are found with these “restorations”.  We wrote this up for a woman who purchase this scooter so that she could have some ammunition and proof of false advertising to use in an attempt to get her money back from the dishonest importer who sold it to her*.

While shiny and clean-looking at first-glance, a trained eye can spot a "Bodge" from a mile away and can see that these "restorations" not only look super "off" and wrong, but they nearly all seem to be wrong in the same way, as if every "builder" or "shop" over there is for some reason working off of the same distorted, tarted-up template. 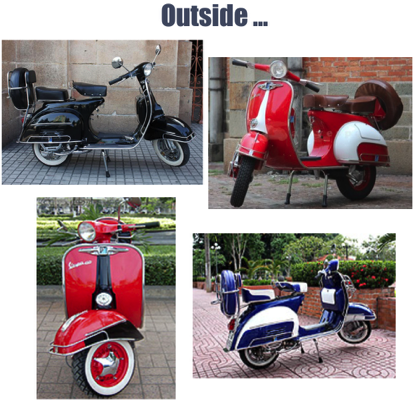 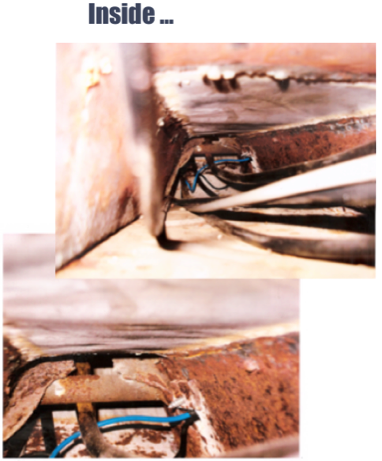